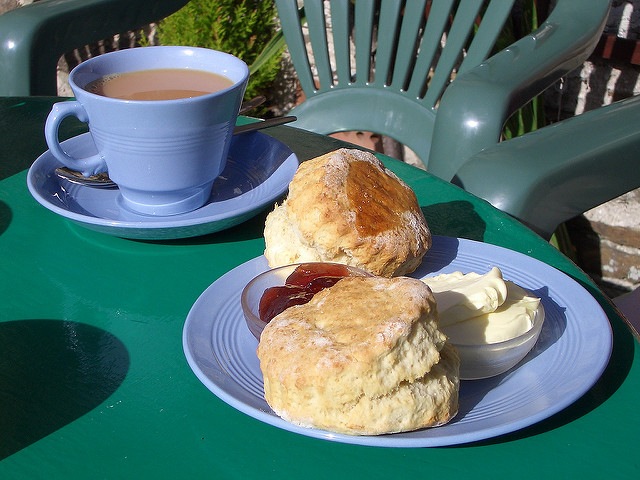 Tea is one of those things everyone associates with the UK, and England in particular. Each year every person in the United Kingdom consumes almost 2 kg of tea and makes over 900 cups.

There are many kinds of tea, but the tea preferred by British people is black tea. If you go to a tea house or tea room or even a coffee shop and order tea, you will get black tea with milk (sometimes inside a little jug, sometimes already mixed) and sugar on the side. No one will ask: what kind? Unless the person serving you is not from the UK. Lately other varieties of tea (like green and herbal) are becoming more popular, but black tea is still the preferred kind. In the past the upper classes had weak tea with little or no milk and no sugar, and the lower classes preferred strong bitter tea with a lot of milk and a lot of sugar. This sweet milky tea is known as builder’s tea and is usually served in cafeterias (usually called a caf) in a mug. The lighter tea is the one now most commonly served in tea rooms in teacups.

In the UK people usually drink black tea, but there are also a few blends that are popular.

Tea as a break from work

In the UK workers are allowed by law to have a 20 minute break if they work for at least 6 hours. For some people this is their lunch break, but for most it falls on different times. Most people call this their tea break and use the time to have a cup of tea and sometimes go outside and smoke or have a quick snack. Many people also take a tea break, a non-official 5 or 10 minute break to prepare a hot drink as a way to take a short rest from work. People in office jobs use it as a chance to ‘stretch their legs’ and people in physical jobs sit down for a short while.

Tea as a meal Britain

The word tea can also be used to refer to a meal. This usually confuses people from outside the country who think of tea as only a drink and don’t realise it can have other meanings. In the UK there are many tea rooms that serve especial late afternoon light meals with tea. Usually the food is small cakes, sandwiches or scones, or a variety of those. Usually this is called 5 o’clock tea by people outside of the UK, and many tea rooms call it that way for tourists. Cream tea is a common meal that includes a pot of a tea, a plain scone, jam and clotted cream. For children, the last meal of the day is also often called tea. They have it at around 4 or 5 right after finishing school and before going to bed. Nowadays, children usually have a smaller version of their parent’s evening meal or a specially-cooked meal, but in the past they would have some cold leftovers from the parent’s midday meal. And even if the word tea is used to talk about a cup of tea, it is usually served with some biscuits to accompany it. Everyone has their own preferred way of preparing tea. George Orwell (the author of Animal Farm and 1984) wrote an essay about it called A nice cup of tea. It’s a short read and quite funny as well! To know more about is always better to learn the English language with Way Language school using Callan method.