Moving around London (part 3): the bus

Moving around London (part 3): the bus 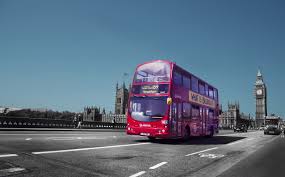 This week we are looking at what is probably the most popular way to move around London: the bus.

If you haven’t seen them, we also have articles about the tube and the train.

London buses are one of the largest bus networks in the world. Every year 1.8 billion passengers travel in over 700 bus routes. Because buses are so popular several years ago TfL decided to make all buses diesel or diesel/electric hybrid to help with pollution levels in the city.

All buses are controlled by TfL but they are run by several private companies that manage several routes for 5 years. Each company runs the buses as they see fit but they need approval from TfL if they want to change stops or frequency.

Red buses are an icon of the city and they have a lot of fans. There are several groups that meet regularly around the city to stay updated with changes and talk about trivia and trips they have done. There’s even a wikia website dedicated to London buses.

You always need to pay to use the bus. If you don’t pay the bus driver can refuse to move and can even call the police. If you are on a bus and it has to stop before reaching its destination, you can ask the driver for a special ticket that you can show the next bus you board and that way you don’t have to pay again. But you need to keep it with you until you get off, or you can be asked to pay again and be fined.

Cash fares are not allowed on the bus. All trips cost the same (flat fare) but you need to use either an Oyster car or a contact less card.

If you are using an Oyster card you can have money pre-loaded and the fare will be paid with that, or you can have a travel card or bus pass. Travel cards allow you to use all buses no matter what zone it is. A bus pass allows you to use any bus (or tram). If you pay with a contact less card TfL will work out the best fare for you and the money will be taken from you account 3 days after travelling.

Buses also have the hopper fare. If you get on a bus, you can use another one within one hour and you don’t pay for the second one. You have to use the same oyster or contact-less card on both buses, and the discount will be done automatically. Be careful because it has to be exactly 1 hour, if you are 1 minute late, you will pay for the second bus.

Buses operate all day long. Some services are day only (usually from 5 am to midnight), some are night only and some are 24-hour services.

24-hour services have a small half sun/half moon icon and a text that reads 24 hour. Night services sometimes have a small owl icon, they are always coloured blue on signs and their number has N in front of it (for night). Night services usually have the same number as a day service but their route could be different, usually it’s longer or it goes through busier areas.

Top 5 tips for using the buses

And one extra tip: make sure you give yourself plenty of time! Traffic in London is always busy and can make you late.

Do you have any tips for using the bus? Tell us in the comments.