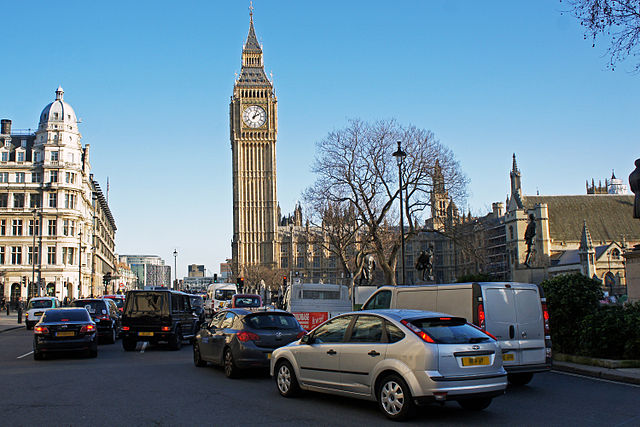 Today we’ll be talking about a different way of moving around London: cars.

Driving in London can be a very stressful experience or a relaxing one, it all depends on the route you take and the time of the day!

Previously we’ve written about four popular forms of public transport: the tube, the train, the bus and the tram.

Almost from the beginning cars were considered dangerous, so a law was passed limiting speed and number of cars on the streets. In 1896 after car fans started pressuring the government the law was changed and the speed limit was raise to 14mph. This changed the future of cars forever and it is now celebrated every year with the London to Brighton Veteran Car Run during the first Sunday of November.

Driving licences started appearing on 1903, but the driving test didn’t start until 1935 when there were already 1.4 million cars on the roads. It wasn’t until 1996 that the theory test was introduced.

There are of course no tickets or fares needed for driving (other than the regular car expenses), but there are some charges that could apply to you.

There are 3 possible charges for driving in London:

There are also generally charges for parking. These vary according to the location and the day and time. Look for signs near your parking space to see if they apply. If you have to pay there will be ticket machines near, you can pay using coins or using your phone with a text message. Some modern machines accept contact less (card or mobile phone) payments.

To know more about is always better to learn the English language with Way Language school using the Callan method.

And one extra tip: If you can, use public transport! Trips take usually the same time or less (especially in zones 2 and 1) and you’ll be able to read a book or practise some English.